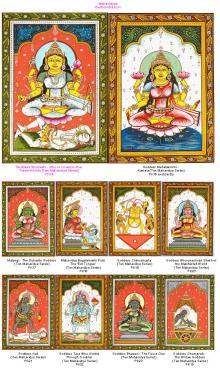 For Bhoga (fulfillment of materialistic desires) and Moksha (spiritual liberation).The worship of Dasmahavidya provides bhoga (fulfillment of materialistic desires)and moksha (spiritual liberation). The Ten Mahavidyas are known as Wisdom Goddesses. The spectrum of these ten Goddesses covers the whole range of feminine divinity, encompassing horrific Goddesss at one end. to the ravishingly beautiful at the other. Mahavidya means (Maha - great: vidya - knowledge) Goddesses of great knowledge. These Goddesses are: Mahavidyas - The ten forms of Shakti.

The worship of Dasmahavidya provides bhoga (fulfillment of materialistic desires) and moksha (spiritual liberation). Birth of Das Mahavidyas: Once when an incensed Shiva threatened to walk out on Parvati. After no amount of coaxing or cajoling by Maa Parvati helped. Maa Parvati multiplied herself into ten different forms for each of the ten directions. Thus however hard Shiva might try to escape from his beloved Parvati. he would find her standing as a guardian. guarding all escape routes. Each of the Devis manifested forms made Shiva realize essential truths. made him aware of the etemal nature of their mutual love and most significantly established for always in the cannons of Indian thought the Goddess’s superiority over her male counterpart Not that Shiva in any way felt belittled by this awareness. only spiritually awakened. This is true as much for this Great Lord as for us ordinary mortals Befittingly thus they are referred to as the Great Goddess’s of Wisdom. known in Sanskrit as the Mahavidyas. Indeed in the process of spiritual learnin - the Goddess is the muse who guides and inspires us. She is the high priestess unfolds the inner truths.