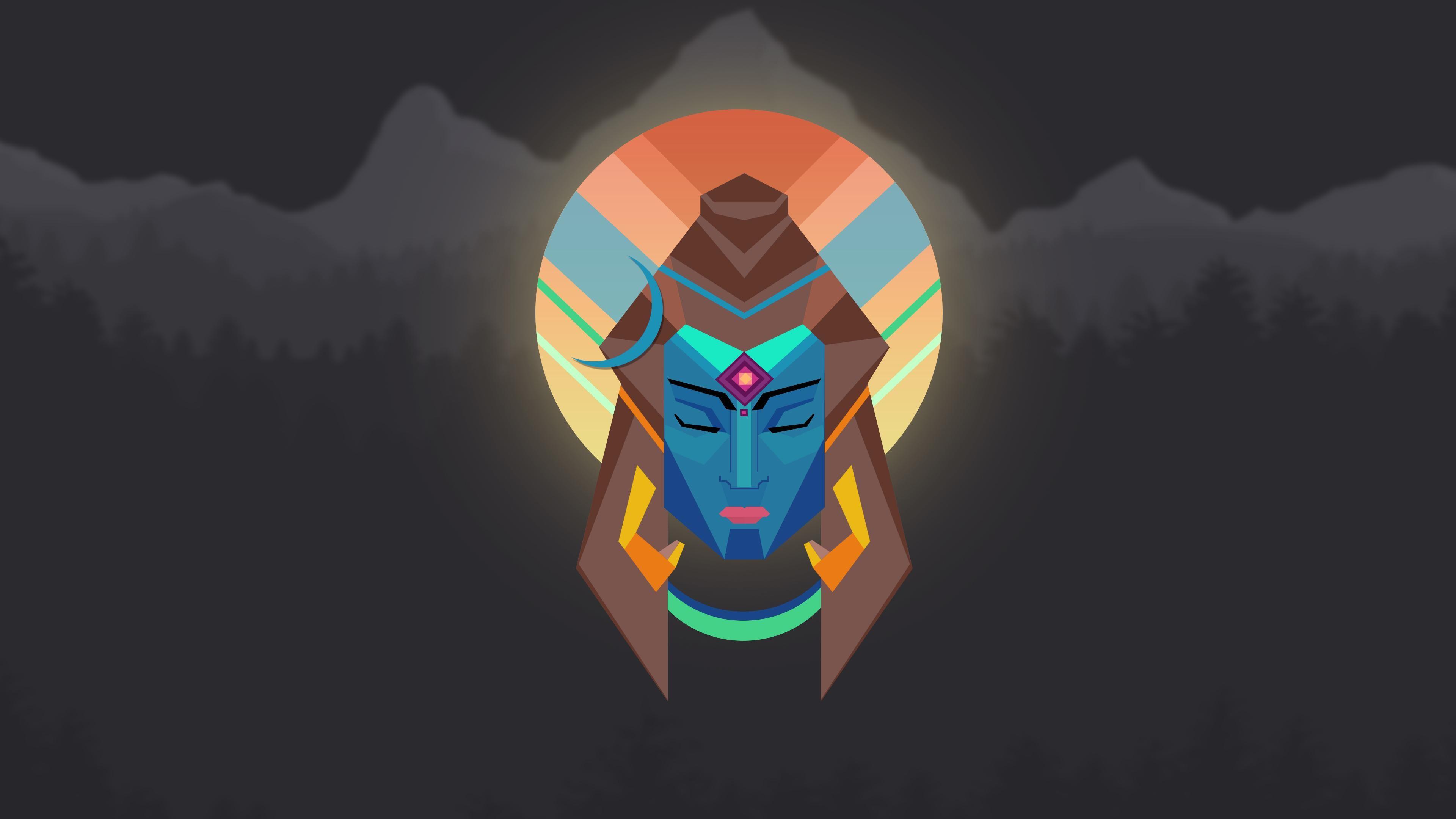 Maha Shivratri, also known as "The Great Night of Shiva," commemorates the union of Shiva and Shakti. Shiv and Shakti are revered as the ideal of passion, power, and oneness. While concentrating and singing his name, chants and mantras turn on spiritually; the universe appears heavenly. Lord Shiva is the God of Gods.
Maha Shivaratri is a well-known Hindu celebration held every year to honour Lord Shiva, the Hindu lord of destruction and restoration.

This year's celebrations will begin at 3:16 a.m. on the 1st of March and finish at next day 1:00 a.m. on the 2nd of March. Believers stay up and give prayers, rituals, and adoration to Lord Shiva, the most elegant and mighty God. Maha Shivaratri is also known as "the Great Night of Shiva." Mahashivratri is tremendously significant to most people who are on the correct path to enlightenment.
When is Maha Shivratri Celebrated?
So each lunar month, Shivaratri is observed on the 13th night and 14th day. While there is a Shivratri in every lunisolar month of the Hindu calendar, it is thought that the Maha Shivratri, which occurs once a year, occurs shortly before the coming of Spring. This is because the festival commemorates the winter solstice and the approach of summer and is a prominent observance in Hinduism. In the Western calendar, this is generally in February or March.

The northern hemisphere of the globe is placed on this night that there is a natural rush of energy in living beings. This is a day when the environment forces you to reach your spiritual zenith.
It is imperative to the Shaivism tradition of multiple Puranas (Hindu Mythology), which idolizes Shiva as its major god and provides several variations of this event while mentioning Shiva iconography.
Maha Shivratri is celebrated on a massive scale throughout Nepal, Mauritius, Sri Lanka, and anywhere Hindu Indians dwell around the world.  Yet, it's Shiva's night, who is the simplest of the Blessed Trinity to impress.
Thus, Mahashivaratri is both a ceremonial and a cosmological definition of the Hindu cosmos. It dispels misunderstanding, emits the light of enlightenment, awakens one to the cosmos, brings in Spring after a long, cold, and dry wintertime, and summons the ultimate power to take notice of the creatures he created.
Why Mahashivratri is Celebrated
Puranas contain many stories and legends describing the origin of this festival.
Samundra Manthan
According to one, during the Samundra Manthan, when gods and goddesses arrived together to whip up a drink of immortality, 'Amrita.' The poison 'Halahala' was so poisonous that it could shatter the whole universe, including all the Gods & Goddesses. Immediately, the poison came out, and the space began to heat up, killing plants and animals. A pot of poison emerged from the ocean. This terrified the Gods and demons as the venom could destroy the entire world, and they ran to Shiva for help. Shiva drank the deathly poison but held it in his throat instead of swallowing it to protect the world from its evil effects. This made his throat turn blue, and he was given the name Neelakantha ( blue-throated), the blue-throated one. Shivaratri is the celebration of this event by which Shiva rescued the world.
Various efforts were made to cool down Lord Shiva, & 'Bhang' was also given to him as an act of coolant & lowers down metabolism. This is how 'Bhang' is associated with Lord Shiva's Life. So, the devotees offer Bhang to placate Lord Shiva on Maha Shivratri.
Maha Shivratri is commemorated to mark a remembrance of 'overcoming darkness and lack of knowledge in life and the world. Unlike most festivals, it is celebrated at night and solemn.
marriage of shiv and shakti
Maha Shivratri is dedicated to celebrating Lord Shiva & Goddess Parvati's Marriage. The lord of destruction married Parvati – the goddess of fertility, love, and beauty, also known as Shakti (power). As per belief, Goddess Parvati wanted to marry Shiva, and every Hindu God knowing this fact wished to do the same. But Shiva refuse and destroyed this proposal through his Third Eye. However, Devi Parvati kept hope alive and continued praying for Shiva as she wanted him at any cost. Seeing her indescribable love, Shiva couldn't deny but nodded for the Marriage. Happiness flooded all over the place, and they invited all the Gods & Goddesses to be the part of a historic Marriage of Lord Shiva & Goddess Parvati, including Ghosts & Spirits. Such an Overwhelming Story to listen to, read, & even celebrate!
Mahashivratri is very memorable for people who are on the spiritual path. It is also crucial for people in family situations and the aspirational in the world. People who live in family situations observe Mahashivratri as Shiva-Shakti's wedding anniversary. Those with worldly ambitions see that day as the day Shiva conquered all his enemies.

Unlike many other Hindi festivals, Maha Shivratri is a more solemn festival as it is marked with internal reflection and introspection. Devotees spend the day in prayer, meditation and observing strict full-day fasts. Some celebrate in the morning while others organize 'Jagran' at night.
After going through this story, the only words that believers can say are Om Namah Shivaya.
Lingam is a Hindu deity ( shiva lingam)
Another mythology in the Shiva Purana claims that Brahma and Vishnu, the other two Hindu Gods in the trinity, were once arguing over the greatest of the two. The other gods were terrified at the severity of the conflict and urged Shiva to intercede. Shiva appeared in the shape of a massive column of fire between Brahma and Vishnu to help them realize the hopelessness of their conflict. They resolved to discover one end each to assert superiority over the other, amazed by its vastness. In the guise of a swan, Brahma flew above, while Vishnu, as Varaha, descended into the ground. Light, on the other hand, knows no bounds, and despite searching for hundreds of kilometres, none of them could reach the end. Finally, Brahma stumbled upon a Ketaki flower floating down gently on his ascent. The Ketaki said she'd been deposited as a sacrificial at the top of the blazing column when questioned where she came from. Because he couldn't locate the top limit, Brahma decided to give up and accept the flower as a testimony.

The enraged Shiva then showed his actual self. He condemned Brahma and scolded him for lying, saying that no one would ever worship him again. As she had fraudulently testified, the Ketaki flower was also prohibited from being used as sacrifice for any worship. Because Shiva initially showed himself in the shape of a Linga on the 14th day of the darkest half of the month of Phalguna, the day is considered highly fortunate and is celebrated as Mahashivaratri. On this day, it is said that worshipping Shiva would bring you pleasure and success.
The devotees chanted the holy Panchakshara mantra devoted to Lord "The devotees chant Om Namah Shivaya".
Throughout the day, devotees may be seen worshipping the 'Shivling' – Shiva's iconic symbol – and performing Rudra-Abhishek, in which they wash the Shivling with water, curd, milk, flowers, incense, and other gifts. In various temples across India, 'Om Namah Shivaya' and 'Har Har Mahadev' chants echo. In addition, unmarried women fast during Maha Shivratri in the hopes of finding a spouse like Lord Shiva.
Bel Patra (Wood Apple/Indian Bael)
The Bel tree, also referred as the bilwa or bilva tree, is said to be a favorite of Lord Shiva, and its leaf and fruit are still used in his devotion.
The all-night Shiva devotion on Shivratri, according to Hindu mythology. Once upon a time, there was a poor indigenous man who was a tremendous Shiva devotee. He went deep into the woods to gather firewood one day. However, he became disoriented and was unable to get home before dark. He heard the growling of wild beasts as darkness fell. Terrified, he went inside the nearest tree top for protection till the sun came up. He was terrified of falling from the tree since he was nestled amid the branches. He chose to stay up by plucking a leaf from the branch at a time and dropping it while reciting Shiva's name. To keep himself awake at daylight, he discovered he had dropped a thousand leaves upon a Linga, so the tribal removed one leaf off the tree at a moment and placed it down, which he had not noticed in the dark. The tree was a wood apple, sometimes known as a bel tree. By Shiva's favour, the tribe was blessed with celestial ecstasy as a result of their inadvertent all-night adoration. On Mahashivaratri, devotees who are fasting repeat this narrative. Devotees consume the Prasad presented to Shiva after completing an all-night fast.

Huge celebrations are performed in temples around India, with the largest taking place in Ujjain, Madhya Pradesh, where Lord Shiva is said to have resided. Shiva temples in Tamil Nadu, Andhra Pradesh, and Uttar Pradesh hold special ceremonies.

Vidhi Vrat
Devotees should only eat once the day before Shivaratri Vratam, most probably on Trayodashi. After performing morning rites on Shivaratri day, devotees should take Sankalp to fast for the entire day on Shivaratri and eat the next day. Sankalp is a fasting ritual in which worshippers swear consciousness throughout fasting time and ask Lord Shiva's permission to complete the fast without interruption. Hindu fasts are rigorous, and participants promise consciousness and seek God's favour before beginning them to end them effectively.

Maha Shivratri is a chance to encounter the enormous nothingness that exists inside every living being and is the root of all existence. Shiva is renowned as destruction on the one hand. On the other hand, he is recognized for being the most caring. He's generally recognized as the most generous of the donors. Many anecdotes regarding Shiva's kindness abound in the yogic tradition. His empathy has been shown in various ways that have been both remarkable and surprising. As a result, Mahashivratri is also a significant night for collecting. Our prayer and gift are that you do not go through this night without experiencing at least a glimpse of the immensity of the void we refer to as Shiva. Allow this night to be more than simply a night of sleeplessness; allow it to be a time of revelation for you.