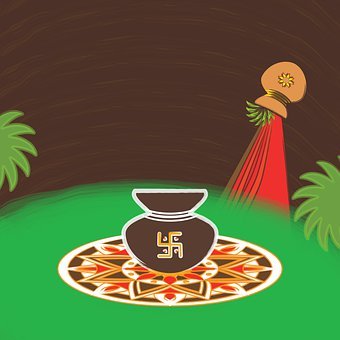 The most prominent event in Maharastra and the Konkan area is Gudi Padwa. It is a classic Marathi Hindu new year and a regional Indian event. It also marks the beginning of the Hindu calendar's civil year, based on the Luni-Solar calendar, especially in the central Indian states of Maharashtra, Andhra Pradesh, and Karnataka. During the first day of the Chaitra, Gudi Padwa, also known as Gudi Padva, and Samvatsara Padvo are performed.

This means it usually takes place in late March or early April on the Western calendar, on the same day as Cheti Chand in Gujarat, Ugadi in Andhra Pradesh, and Yugadi in Karnataka is celebrated as the Telugu and Kannada New Year in the Deccan area of India.

The Ugadi/Gudi Padwa festival is observed in the region between the Kaveri River and the Vindhya Mountains, which follow the Luni-Solar calendar. Months and days in a year are computed using the locations of both the Sun and the Moon in the Luni-Solar calendar, whereas the Solar Calendar uses just the planet Sun. Thus, for the inhabitants of these places, Ugadi or Gudi Padwa is the astrological new year, which is celebrated with much pomp. In Karnataka, it is also known as Yugadi.

WHEN DOES GUDI GET HIS ANNUAL CELEBRATION?

why is Gudi Padwa a big deal?

Gudi Padwa is also called Samvatsara Padvo, which refers to the first day of a new Samvat. Samvatsara is a 60-year cycle that is based on Jupiter's location. Every year in the Samvatsara cycle is given a definite name, and the essence of the current Samvat is used to forecast the future year.

Gudi Padwa is the first day of the Hindu calendar based on the lunisolar system. Surya Siddhanta, a historical text, forms most Hindu calendars. According to Hindu mythology, Lord Surya personally delivered the Surya Siddhanta treatise to humanity. As a result, tracing the origins of Gudi Padwa may be difficult.

According to Vedic astrology, Gudi Padwa is a very auspicious day. Sadhe Teen Muhurat governs the day of Gudi Padwa. Gudi Padwa, Akshaya Tritiya, Vijayadashami, and half of Bali Pratipada form Sadhe Teen Muhurta in Vedic Astrology, thus there is no need for Muhurta these days. All effort done on these days is expected to provide excellent outcomes.

Because of its significance in the Hindu faith, this holiday is ideal for trying a new initiative, business, or course. At the start of the lunisolar calendar year, Chaitra is the first month of the Hindu calendar, and it was on this day that Hindus commemorated Gudi Padwa. Every object hoists the Gudi has a deep symbolic value and represents numerous beautiful parts of our lives. It is thought to remove negativity from home and bring good fortune and happiness. Gudi Padwa is also a significant day for shopping, and many people go shopping on this day.

The Bramha Purana, which is recognized as the oldest manuscript in humanity, mentions the importance of this celebration. A massive flood has occurred on Earth many, many years ago. Time had come to a halt, and he had obliterated every living thing and feature of nature. Lord Brahma is claimed to have begun the creation of the Known World on this day. Time began to tick afresh on Gudi Padwa, heralding a new period of truth and justice known as Satyug.

As a result, Lord Bramha is worshipped on Gudi Padwa.

Worshippers begin the day with a traditional wash, accompanied by chants. People decorate their front doors with torans of flowers/mango leaves and rangoli to commemorate the festive event.

The Gudi flag was constructed by attaching a red or yellow silk scarf to a bamboo staff with neem leaves and mango blooms. Along with the Gudi, a Saakhar Saathi (sugar candy garland) is strung. This ceremony represents life's melancholy moments.

Upon that bamboo stick is an upside-down Kalash made of silver, copper, or bronze representing triumph. The Gudi is raised outside of the home when the pooja is completed.

On this day, There are a variety of foods prepared to commemorate the Gudi Padwa festival.

In several North Indian regions, that day kicks off the Chaitra Navratri celebrations, which will last for nine days and end on Rama Navami. Gudi Padwa is observed chiefly throughout Maharashtra, where the Amanta calendar is used. The first day of the year begins 15 days before Chaitra Pratipada or Gudi Padwa in North Indian regions that use the Purnimanta calendar. As a result, the first day of the year commences and Holika Dahan in Purnimanta calendars. Most Panchang, meanwhile, change the Samvat the same day as the conversation, i.e. Vikram Samvat and Shaka Samvat.